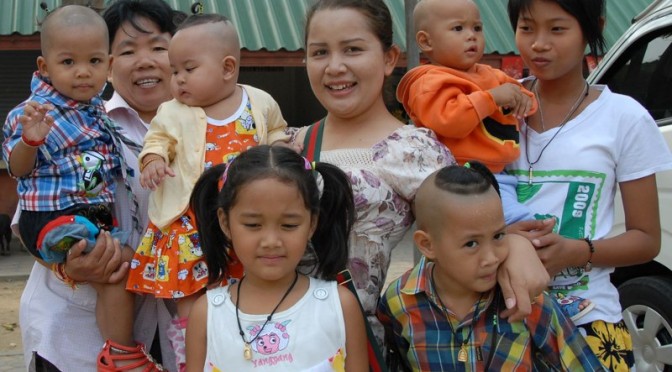 Babies are captivated by the here and now, and certainly enjoy their sleep. UCSF longevity study results find that staying in the present moment and quality sleep promote healthy aging.

When we witness the magic of a baby growing and developing day-by-day, it hardly makes one think of “aging”. The length of their life is just beginning. But from day one living and aging imprints on a cellular level—we have an internal clock in our body that regulates longevity. So how do we slow this clock and thrive from birth to old age?

I’ve been studying such questions for decades, so when I had the chance to participate in a yearlong study on aging at University of California, San Francisco, I eagerly signed on. Especially because the lead investigator, Professor Elizabeth Helen Blackburn, won the 2009 Nobel Prize in Physiology or Medicine for her work on telomeres: biomarkers for aging. The length of telomeres correlates to cellular and general bodily aging. They are structures at the end of chromosomes that protect the chromosome from deterioration or from fusion with neighboring chromosomes. Dr. Blackburn uses the analogy of plastic caps at the end of a shoelace: “as the plastic ends shred, and the shoelace becomes frayed and damaged, so too the shortening of our telomeres can leave our cells vulnerable to damage.”

Telomeres tend to shorten as we age and in response to all forms of stress. UCSF researchers had already found that short telomeres are a risk factor for early disease and death. In 2004, the same research team conducted a study that found that high psychological stress predicted shorter telomere length. But subsequent studies have found that incorporating regular physical activity can mitigate the damage done by stress and stop the shortening. Long telomeres are related to healthy aging and overall longevity. The enzyme telomerase protects telomeres from eroding, and studies have shown that a 3-month program of yoga, low fat diet, and increased physical activity increases telomerase. My lifestyle and attitude would be put to the test.

I was one of two hundred and sixty-three healthy women between the ages of 50 and 65 who participated. They asked us to complete various questionnaires throughout the year, every few months they interviewed us, and at the beginning and end of the study they collected small amounts of blood, strands of hair, and saliva. Since this data was collected the researchers have been busy analyzing it to find correlations between certain behaviors and lengthening of telomeres. Two papers have been published detailing the study results. The first one found “evidence for an association between sleep quality and leukocyte telomere length (LTL), a marker of immune cell aging,… women reporting poorer subjective sleep quality had shorter LTL, independent of age, body mass index, race, and income, thus, providing preliminary evidence that LTL may reflect a potential biological mechanism linking sleep and age-related disease.” (SEE: Journal of Aging Research 2011; 2011: 721390. Published online 2011 October 20. doi: 10.4061/2011/721390
http://www.ncbi.nlm.nih.gov/pmc/articles/PMC3199186/

The second study results were published in the peer-reviewed journal Clinical Psychological Science November 15, 2012 http://cpx.sagepub.com/content/early/2012/11/06/2167702612460234.full
According to the findings: “those who reported more mind wandering had shorter telomeres, while those who reported more presence in the moment, or having a greater focus and engagement with their current activities, had longer telomeres, even after adjusting for current stress.”

My 1-year telomere length change was a lengthening of 301 basepairs. All my years of eating a healthy diet, getting regular exercise, sufficient sound sleep, and daily stress reduction through yoga, music, and mindfulness practice are paying off. May you be encouraged to prioritize a healthy lifestyle for the longevity of you and yours.

For more on longevity listen to a recent broadcast of the Diane Reme show—an interview with National Geographic Dan Buettner found lifestyle habits, not genetics, can determine up to 90% of life expectancy
http://thedianerehmshow.org/shows/2012-11-21/dan-buettner-blue-zones-second-edition

A 20-year research project is the first of its kind to measure telomeres across the entire lifespan of individuals in a wild population http://alturl.com/98igp