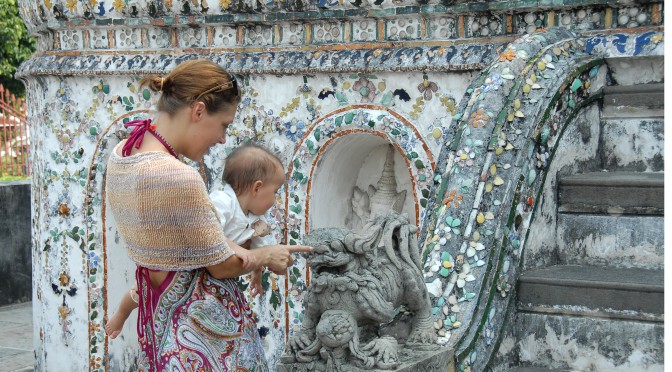 Sensory strategies or perceptual styles aid in our understanding of the neural mechanisms of self-consciousness. So as we dance, and as our baby moves about along with us, a self-identification unfolds because of visual gravitational and vestibular signals.

In our last post, we discussed how our senses cooperate and collaborate in the brain. For example, babies who had greater concentration of gray and white matter in brain areas linked to motor abilities and memory processing at 7-months, predicted greater language ability at age 1. Lets look further at how our sensory input is vital to development.

A baby’s brain is busy recognizing a pattern and making predictions relative to that pattern—if a prediction is faulty, it activates an error signal. Babies listen to our unique way of speaking to them (known as motherese or parentese) that characteristically imparts a singsong emotive quality to our words. They are able to pick up vocal and non-vocal cues and patterns, which allows them to make sense of the general meaning of our words. Likewise, with musical perceptions, 5-month olds are able to tell apart an upbeat tune compared to a sad one.

Newborns as young as 2 days old can decipher pitch, but subsequent studies conclude that rocking to the beat is innate. István Winkler of the Hungarian Academy of Sciences in Budapest and colleagues conducted studies of newborn infants. They discovered that babies can detect the beat in drumming infused rock music. He believes that evolution may have favored brains wired to rock for learning purposes and, he suggests: “music went along for the ride.”
Jessica Phillips-Silver and Laurel J. Trainor tested seven month-old infants at their baby lab at McMaster University in Canada and discovered that it is the movement of the head and activating of the vestibular system, more than the limbs, that cause metrical encoding to take place.

Even premature babies find enormous benefits from hearing live music being played or sung. Eleven hospitals did a coordinated music therapy study, led by Beth Israel Medical Center in New York, and found it helped premature infants reduce stress and stabilize vital signs. Turning parents’ favorite tunes into lullabies calmed the preemies’ breathing and heartbeat, fostered greater ease while sucking, facilitated sleep, and encouraged alertness. Some hospitals participating in the study found that music therapy to be a legitimate alternative to sedating, being safer and just as effective. All this, in turn, reduces parental stress and anxiety. These benefits allow an infant’s much needed energy reserves to go toward typical development.

The calming effect the music therapists imparted has also been observed while just picking up a baby and moving. Recent research reported in Current Biology (May 6, 2013) stated these findings: “…a novel set of infant cooperative responses during maternal carrying. Infants under 6 months of age carried by a walking mother immediately stopped voluntary movement and crying and exhibited a rapid heart rate decrease, compared with holding by a sitting mother…Our study has demonstrated for the first time that the infant calming response to maternal carrying is a coordinated set of central, motor, and cardiac regulations and is a conserved component of mammalian mother-infant interactions.” As one of the lead authors suggest: “A scientific understanding of this infant response will save parents from misreading the restart of crying as the intention of the infant to control the parents, as some parenting theories—such as the ‘cry it out’ type of strategy—suggest,” Kuroda says. “Rather, this phenomenon should be interpreted as a natural consequence of the infant sensorimotor systems.”
Indeed, the sensorimotor system is vital to our very consciousness. Sensory strategies or perceptual styles aid in our understanding of the neural mechanisms of self-consciousness. So as we dance, and as our baby moves about along with us, a self-identification unfolds because of visual gravitational and vestibular signals. As Christian Pfeiffer et al. conclude: “….the experienced direction of the first-person perspective depends on the integration of visual, vestibular, and tactile signals, as well as on individual differences in idiosyncratic visuo-vestibular strategies.”
REFERENCES
Gianluca Esposito, Sachine Yoshida, Ryuko Ohnishi, Yousuke Tsuneoka, Maria del Carmen Rostagno, Susumu Yokota, Shota Okabe, Kazusaku Kamiya, Mikio Hoshino, Masaki Shimizu, Paola Venuti, Takefumi Kikusui, Tadafumi Kato, Kumi O. Kuroda