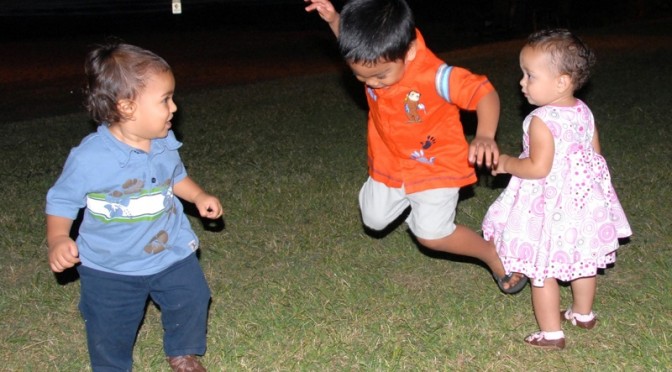 Based on what a baby understands is a person’s goal and belief, they predict action from the information they understand will influence that person’s behavior.

A simple image of a baby, whether you know him or her or not, activates the part of your brain responsible for speech and movement. It also excites the brain circuits related to feelings of empathy, attachment, and reward. Likewise, researchers have found that a 6 month-old baby’s brain is turned on as they predict what causal role your perspective plays in what you do. The sensorimotor system lights up as predictions about the other’s action are generated, specifically, how the behavior will take place. This action prediction was measured by observing the activation of the motor cortex of infants.

Babies encode and create a representation of a behavior from the other’s perspective prior to the prediction. This ability to predict is crucial for correctly assessing social interaction. This means that a baby understands that people have goals, and can identify a particular goal—mommy wants to dance. Then they must consider what the other person knows about what it means to dance—mommy thinks it is time to turn some music on. Finally, based on what they understand is mommy’s goal and belief, the prediction is generated from the information they understand will influence her behavior. Importantly, the researcher’s results revealed that: “…6-month-old infants (and adults) make an action prediction only when it is congruent with an agent’s representation of the world.”

Successful social interactions depend on this ability to be able to follow events from others’ perspectives and then predict others’ actions. This ability remains crucial throughout life, especially as a fundamental skill for cooperating and collaborating with others. By the end of the first year, an infant is “already motivated to help others attain their goals and to engage in collaborative activities with others.” Indeed, some studies have found that even at 2 months, babies are anticipating what a person may do if the behavior relates to them. Therefore, there is a scaffolding of skills: first a baby is able to predict what may happen to them; then they develop less self-centered awareness that predicts others’ object-directed actions.

Dancing with your baby is a viable way to facilitate your baby’s acquisition of this developing ability. Soon they will predict what music you’ll put on by the type of dance moves you entice them with, or vice a versa—they’ll predict what dance moves you’ll make depending on the type of music you put on. What an enriching environment in which to foster your child’s budding success at social interactions, cooperation, and collaborations.